I have gone to several of the Occupy movement events here in Bend, Oregon and I believe these local Occupy supporters are as patriotic and well intentioned as is the Fourth of July crowd. Everyone here in this small city of eighty thousand seems to want what is best for the country and the whole world as well as for our local community. Bend is geographically as remote from from America as it is possible to be and still be in the contiguous lower forty eight states, but its heart is dead center. It’s a two hour drive over mountains to another city of over one hundred thousand in the Willamette Valley and four hour drive to Portland which is only half a million. To the east there are very few people for hundreds of miles, only a gas station or two along the highway. 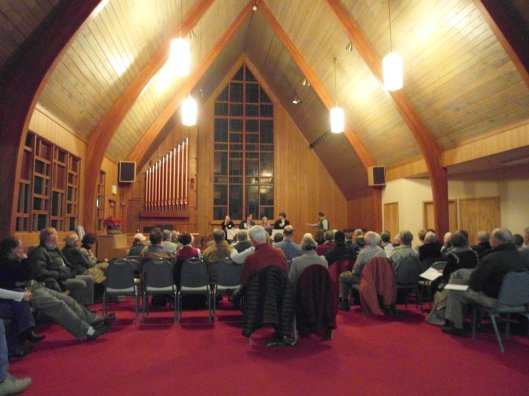 This is the Occupy meeting held at the First Presbyterian Church’s, small chapel last week. As you can see most of the people were relatively old to be involved in a radical movement, but they are definitely concerned citizens. I don’t think these people can have any significant impact on American politics or the economy via this particular movement as I discussed in my blog post The Occupy Movement verses the real American elite, but they can have a real impact by giving the equal amount of time and effort to standard political causes and working through the usual channels.

This was part of The Occupy Wall Street movement in Bend, Oregon last October when standing in front of the Bank of America. It was as well organized and polite as a church picnic. The July 4th in Bend, Oregon, with Pets on Parade was another demonstration of polite but sincere public spirit.

Real political effect will be had by putting people into positions of power.

This is a good book for understanding what the public is receiving in the way of information. It is propaganda, and good propaganda is that which the consumers of it “believe”. This book is easy for the public to digest, and it is what they appear to believe.
The final chapter offers many things which everyone can do to help ease the problems, and prevent or at least mitigate the catastrophe looming before us. A long litany begins on page 288 with, “It is not surprising that individuals sometimes feel powerless when faced with really big issues like man-made climate change. What can one person do when the rest of the world seems intent on self-destruction?” It then gives quite a few suggestions for ways of helping —

electric cars, more home insulation, passive heating and cooling, planting a garden, home lighting and compact fluorescent lights, turning off electrical appliances, getting more efficient equipment, getting a smaller car or using no car at all and taking public transportation, running cars on compressed air, or a hybrid, or diesel, or ethanol, or cooking oil, or wood pulp, eat less meat, buy locally grown foods, fly less and travel by train, telecommute, develop fuel alternatives, generate electricity at home, heat pumps to store heat from the day until it is needed at night, solar collectors on the roof for electricity and water heating, wind turbines, building underground, buy carbon offsets, plant trees, get your country and city to support the Kyoto protocols, vote for Green candidates, use gray water, and low volume toilets.

The book’s concluding paragraph: “There are dozens of other examples where enlightened governments, urged on by consumers and voters, can change habits and markets. In doing so, they can literally change the world, the technologies that power it, and probably save the planet (or at least most of it) from impending disaster. It is a daunting challenge, but we can all help to do it.” — This rather long rip through the last chapter sums up the optimism which it summons, but it is totally futile. This final chapter not only doesn’t address the real problem, it doesn’t even mention it and in fact apparently intentionally avoids it. That problem is simple: there are too many people for the planet to support for very long the way we are mining the Earth’s resources.

China has proven that population control works to improve everyone’s well-being. It is unpopular, but it works. The title of the book, GLOBAL WARNING – The Last Chance for Change, implies that they are going to discuss the real problems, and suggest changes that are real solutions, but it doesn’t even come close to those stated goals. Instead, at the end, it offers the usual optimistic conclusion that forcing supermarkets to stop giving away plastic bags is a significant way to mitigate the problems. That kind of thinking actually worsens the situation because it gives people the illusion that they are doing something significant when clearly they are not. The editors of Reader’s Digest would have done the Earth a far greater service if they spent the money for the production costs of this book on condoms. Yikes! Did I say that? But it’s true, they would have been much more effective in communicating the real problem by distributing condoms, even randomly, throughout the world. Perhaps with slogans printed right on the condoms, and on their containers. They could have spent money for prizes for who could come up with good slogans such as “Never leave home without a condom,” or “A new baby costs ten times as much as a new car.” or “A new baby might eat you out of house, and home, and still starve to death.” Those might not be very good slogans, but with a well publicized contest there could be some really good ones, and they would reach people everywhere. There could be different prizes for different languages, and locations. The production costs of that silly book could have made a visible difference if used in that way. By the Doomsday calculations it appears that it is already too late to avoid catastrophe, but even at this very late hour there is still a slight hope. It’s a grasping at a very slim straw, but it should be done because it might put off the worst of it. Or possibly it would become more apparent to everyone how desperate the problem has become, and therefore why the Lifehaven Strategy should be supported and implemented immediately.

John F. Kennedy, March 1961, as quoted at the end of this book said, “It is our task in our time, and in our generation to hand down undiminished to those who come after us, as was handed down to us by those who went before, the natural wealth, and beauty which is ours.”

Those are fine words, and I agree with them wholeheartedly, but they were spoken by a man who brought us within one hour of Doomsday during the Cuban missile crisis, invaded Cuba at the Bay of Pigs, and invaded Viet Nam, and nearly triggered a Civil War here in the United States. We as people need to observe what is actually done by our leaders, and not just be lulled by their fine rhetoric. GLOBAL WARNING is a mass of fine rhetoric, but when it fails to address the problems which it claims to be addressing, it makes the problem worse not better. If everyone of the 6.7 billion people stopped using plastic grocery bags as recommended at the end of this book, or used twice as many, it wouldn’t make a visible difference in the real problem. They have stated fine goals, but the paths which they propose for attaining those goals obviously won’t work, at least not for very long, before the increasing population swamps all of their efforts, and hastens Doomsday. Back in the 1960s people were saying much the same things as the current crop of Green activists, and if one searched, probably almost every one of the solutions proposed above in GLOBAL WARNING was under public consideration back then. However, then there were 3 billion people and now there are 6.7 billion people. If population had been contained at that smaller level the current problems would not be nearly as severe. If the population were diminished at this time things might slowly get better; however, that isn’t happening, and things are rapidly getting worse as irreplaceable resources are mined away, and consumed. That word consumed is a synonym for destroyed.

The time is rotten with Doomsday.

If one were to return a million years from now the geological strata will clearly show a Doomsday event occurring right now. It is already happening.