In 1506 Leonardo da Vinci finished two paintings of Mona Lisa. The most famous one is in the Louvre museum in Paris, France, and the other one is in the Prado museum in Madrid, Spain. They were painted side by side, and because Leonardo was such a careful painter, reproductions of them can now be viewed life-size, side by side, to form a 3D stereoscopic image. This amazing effect can now be seen at Dudley’s Bookstore in Bend, Oregon.

The Prado’s Mona Lisa was recently restored and needed little adjustment for this display, but the Louvre Mona Lisa was covered with multitudes of cracks from original paint shrinkage, and from layers of protective varnish which also shrank and cracked. To make things worse the cracks filled with dirt, some pieces of paint fell off, also splashes and dribbles of unknown substances streaked across the painting, and the paint changed color.

I made a valiant effort to correct all of these 513 years of accumulated problems, while inserting as little personal influence into the process as possible. That was a real challenge because there are many times when it is impossible to know what was behind the obscuring stuff. I hope that if Leonardo were to see these reproductions he would not be too displeased.

In addition to the 3D effect, when viewing the two paintings side by side, there is a second well-known quality of the Paris Mona Lisa. It has been remarked many times that her eyes seem to follow you. There is some of that effect when viewing the painting and moving your whole body slightly side to side.

But I discovered a much more vivid effect can be created by holding your finger about one-third of the way between your eye and the portrait and slightly to your right side of her face. Look into one of her eyes for about five seconds, and then move your finger slowly over to your left and back toward where you began, taking about five seconds with each cycle of this movement. Be warned, it will give you the creeps! It really looks like her eyes follow your finger. Okay, it’s an optical illusion . . . but they move.

Mona Lisa comes to life and will watch you move.

I have been working nearly nonstop since Christmas digitally restoring the Mona Lisa, painted by Leonardo da Vinci. It is presently in the Louvre Museum in Paris, France. There is a second Mona Lisa in the Prado Museum in Madrid, Spain, painted at the same time by Leonardo and his assistants. The two pictures were painted from perspectives only a few inches apart, and they were so carefully done that when viewed cross-eyed or with special 3D binoculars they form an image in your mind that appears to be in full three dimensions. The Prado Mona Lisa has just been released for public viewing after several years of careful restoration and it looks as clean as the original probably looked when it left Leonardo’s studio.

The problem for my 3D viewing project was that the Louvre copy of the Mona Lisa was in terrible condition. Actually it is in good condition for a painting that is five hundred years old, but it is covered in many layers of corruption and deterioration. I wanted a perfect copy, so the 3D experience would be as wonderful as possible, and that’s why I put in over two hundred hours of effort trying to bring it back to its original condition.

Below is a low resolution image, but for the presentation that is planned for next month I will use a larger file size. This one looks much better than the anything I was able to find online. 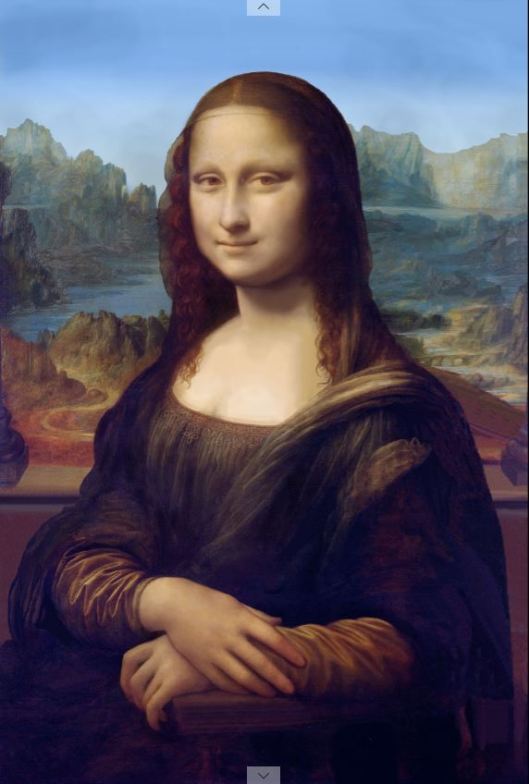 To see some other restorations go to Wikimedia Commons Category:Mona Lisa.

A few days ago I posted See the Mona Lisa in 3D, and mentioned that I wasn’t happy with the quality of the print images I had available to make my examples in 3D. So, I went online and found some high quality images so a better representation of her in 3D may be made. Unfortunately, when the Paris Mona Lisa is viewed in high quality her five hundred years of aging ruins the spectacular effect needed for a convincing 3D image. There is no help for this problem, except for me to fix the Mona Lisa.

I have now begun that project and have put about twenty hours of time into doing a first-level (digital) cleaning of some parts, but that is less than five percent of what needs to be done. Of course things always take twice as long as expected, so it will be a while before anyone will see the results. It is important to get this right, because with beautiful things the smallest flaw is annoying.

When looking back and forth between the Paris Mona Lisa and the Madrid one the variations become apparent, and because they were obviously painted side by side the variations must be accounted for in some way. The painted backdrop obviously didn’t change while the paintings were being made, and because the face is done in scrupulously identical detail, the differences in the background were created by restorations made after they were completed. The Madrid Mona Lisa was probably manipulated the most historically, at least in the background, and the modern restorations took some necessary liberties to fix things. Of course these needed repairs change things a bit from what Leonardo sent out from his studio, but I accept that as a necessity.

In comparing these two paintings a strange difference in emotional quality appears between the paintings. The difference has become quite clear to me, but it is one of those things that if you don’t see it there is nothing to be done to help you see it. It’s like a subtle joke, either you get it or you don’t. The Paris Mona Lisa has a quality of deep wisdom and penetrating insight and understanding of the viewer. The Madrid Mona Lisa has the feeling of a lovely but naïve girl who is looking at us but not into us. Hopefully as the various layers of injury are removed from the Paris Mona Lisa I will be able to maintain the feeling of wisdom. I remember having this feeling when viewing Van Gogh’s painting of his mother.

This could have been done earlier, and can also be done much better than what I am showing here. There are much better images of the two paintings of the Mona Lisa, and I am working from a print copy of an article in the American Scientist, November-December 2015, page 405. The most famous Mona Lisa is in the Louvre Museum in Paris, France, but a second Mona Lisa is in the Prado Museum in Madrid, Spain. They are nearly identical and were obviously painted at the same time in the same studio by Leonardo da Vinci. The paintings were probably done as a team effort with his assistants doing much of the paintings’ background and fill-in areas of clothing and hair, but the faces, hands and sleeves are clearly the work of an absolute master. What is startling about these two paintings is that they are slightly offset in point of view by about the distance between a person’s eyes. Thus when the two paintings are placed side by side and viewed cross-eyed you can see them as a single stereo three-dimensional (3D) image. 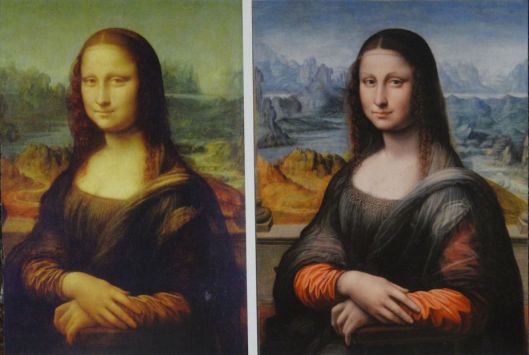 This Mona Lisa painting can be seen in 3D by cross-eyed viewing.

You may view this picture in 3D by sitting 18 inches from your 20-inch computer screen, and holding a tip of a pencil between her lips, your eyes about halfway to the screen with your eyes looking at the pencil tip. Your eyes will be crossed while looking at the tip and you will see two separate images of her face. Now move the tip slowly toward your eyes, and when it is about 3/4 of the way from the screen to your face you will see the images merge into a stereo 3D image. It will help to rock your head slowly side to side an inch or two to help your eyes to fuse, and to level the image. When the image fuses, lower the pencil out of the way, and move your face forward and back, about an inch, to enhance the 3D effect. When you are successful with that, spend time looking at the face and hands to see their even more life-like effect, and view the background near her head to see the flat backdrop painting used for scenery.

It is strange that in 1510 the most famous painting in the world, because of its superb painting skill and emotional subtlety, is also the first and perhaps the only 3D picture made until the 1840s, some 330 years later, when multiple lens photographs were made so there would be duplicates from a single very long exposure sitting. When it was discovered they could be seen as 3D, a whole industry of stereo photos became popular. Viewmaster became a way to travel the world. Even today it’s a major cinema event when Hollywood makes a 3D movie.

500 years after being created Mona Lisa comes to life in a 3D painting.