Some of the many folks at the 100 year anniversary of the Eidemiller reunion in Tipp City, Ohio, (39.9671 -84.1715 American Legion Hall) were descendents of John Louis Eidemiller. He was my mother’s father’s father. During the social turmoil surrounding WWII I lived with my grandfather, Glenn Maurice Eidemiller Sr. about half the time on his farm near Wilder, Idaho. Thus, my linkage with John is a little tighter than one might expect with a great-grandfather. I do remember my grandfather and grandmother, Bertha Lillie Aspinall, also from the Tipp City area, talking about their origins back in Ohio and several times having friends come and visit them from those distant places and reminisce about earlier years. As it worked out Glenn had left Tipp City about three years before the 1912 Reunion happened, and Bertha, his high-school sweetheart, joined him a year later. He several times told the story about the day they got married. It was a long ride in a horse-drawn buggy to the Caldwell, Idaho, train station, so while he was there he doubled the value of the trip and went to the dentist and had several teeth pulled before he got married. He lost some teeth and gained a wife. It was a memorable day.

After John Louis died in 1904 his wife Estella decided to move to a new homestead project in near Wilder, Idaho and took her four sons, Everett, Orville, Harold, and Raymond with her. My grandfather Glenn, the fifth son, was still in high school and remained for a year in Ohio to finish his education, and then stayed on for another year teaching school. He also did some teaching when he got to Idaho. By the time of that first reunion in 1912 all of my branch of the family was out in Idaho. 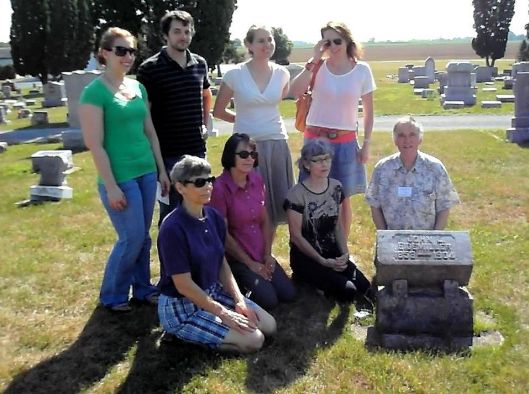 That’s me, behind the stone marker, Charles LeRoy Scamahorn, only son of Mary Estella Eidemiller, (m. George Fredrick Scamahorn of Spokane, Wahsington, div., m. Homer Ernest Johnson buried Kennewick, WA) daughter of Glenn Maurice Eidemiller, son of John Louis Eidemiller. The three sitting women are all of my generation and previously unbeknownst to me face to face, although we had exchanged a couple of phone calls and emails. I found them to be remarkably similar to me in their sense of humor. I had wondered for years why I had some funny habits, and the half-hour drive out to the cemetery was like a time warp for me, back into my childhood. I never expected that. As it turned out they grew up on the same farm where I spent so much of my first twelve years. We reminisced about an irrigation ditch swimming pool on our farm. I showed them a scar on my leg which I got hitting a rock while diving there. Glenn Sr. later left Wilder, his brothers and these women’s immediate relatives, and took his three sons, Earl, Bill and Glenn Jr, to new farms five miles north of Madras, Oregon, on Dogwood Lane. That is where I spent many a summer between 1949 and 1969.

I went to this reunion expecting everyone to be examples of a typical cross-section of Americans, and probably most of them were, (86 were there) but these close relatives were something a little different, because they reminded me of myself. Strange to say they seemed to like me just the way I am, and that isn’t a typical American trait.