When the Ebola outbreak occurred in October of 2014 I began a series of charts that might be useful in tracking the disease and attempting to predict its growth, deaths, and demise. Fortunately, the methods for coping with that disease worked, and when those procedures had been fully implemented, the disease was ended in West Africa. Ebola’s growth rate for the first several months was logarithmic, as is seen in the straight line on the charts below of the number of cases and the deaths.

Much worse is the growth rate of the Coronavirus – COVID-19 (the popular name hasn’t stabilized yet). It seems to be much more contagious and spreads as easily as the common flu. It is particularly dangerous because it appears to be undetectable in a carrier for as long as two weeks after exposure. With the modern popularity of world travel, that permits the disease to spread widely and then become infectious. After it appears it presents itself as the common flu for the period of time when it is most contagious. But it gets more serious and the death rate has been about five percent so far. If a vaccine can’t be created quickly in massive quantities, this will develop into a world-class disaster. It usually takes several months to discover a vaccine that works, and several more months to manufacture large quantities of vaccine. With Coronavirus disease, we may not have that much time before it spreads world-wide.

It is not much comfort to look at the charts below I made for a similar situation with the Ebola virus outbreak. It started in 2014 and was over in about a year. But when the US election comes this November, we will probably have a whole new outlook on what’s important. 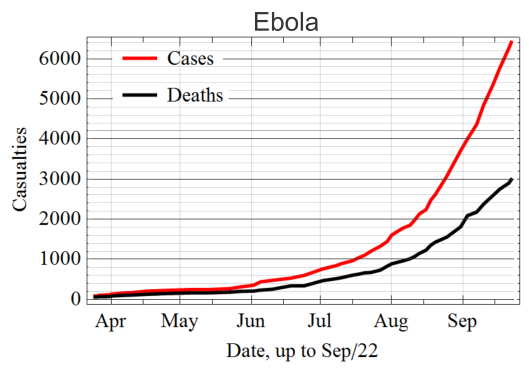 Ebola cases in orange and deaths in red

How to prevent Ebola, the common cold and infectious disease.

Ebola logarithmic chart from 1st victim to vaccine control. With a Plague, AIDS, World War 2, with a 1-year projection. October 10, 2014

This logarithmic chart updates the deaths from the West Africa Ebola outbreak to December 31, 2014 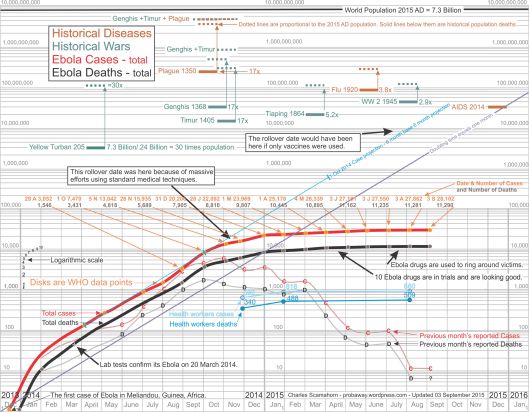 This logarithmic chart updates the cases and deaths from the West Africa Ebola outbreak to September 3, 2015, and compares them to major historical wars and epidemics. 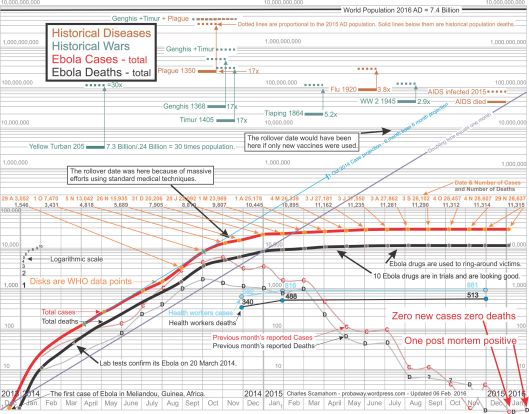 This logarithmic chart updates the cases and deaths from the West Africa Ebola outbreak to January 3, 2016, and compares them to major historical wars and epidemics. Click for a bigger image.

The Boy Scouts are presently in deep trouble, but their motto is what we really should be paying attention to today: “BE PREPARED!”