A couple of days ago there were signs that the small green strawberries and raspberries would become ripe in a couple of weeks. But NO! Pow, there were beautiful looking ones hiding under their leaves after this evening’s walk. Not very many were ripe, but there were enough to give us the flavor of fresh-on-the-vine fruits. There are lots more little berries that will probably come to us within a week or two … if the deer don’t get them first.

These already producing plants are out in front of our house and there isn’t a fence between that portion of our garden and the deer. However, our backyard has a six-foot fence all around, so as long as I remember to close the gates all should be safe. Except for the various little critters such as squirrels, skunks, and bugs. I want my veggies to be absolutely free of chemicals so I am approaching these problems mechanically. That is with fences, netting, spooky reflective owls for the critters, and hoes for the weeds, and fingers for insects I can catch. 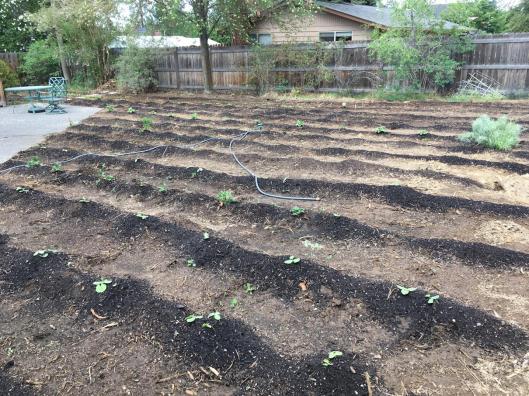 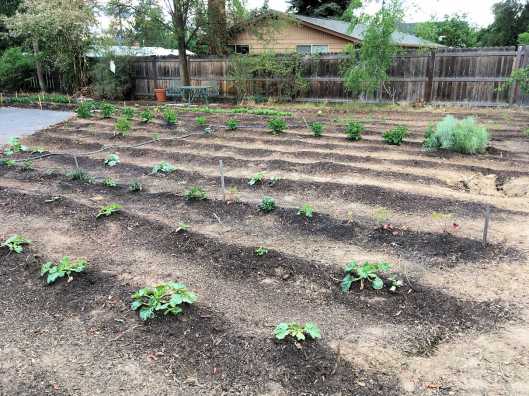 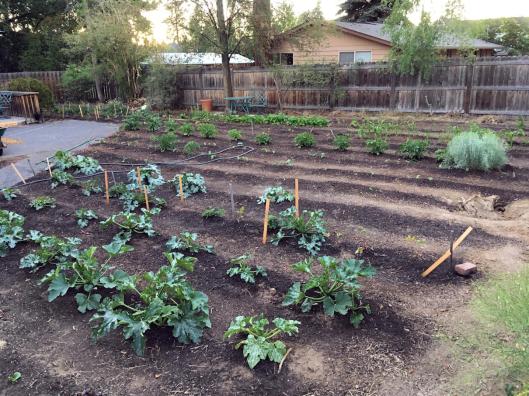 This sequence is a real thrill for me because things didn’t seem to be changing much from day to day, but wow, look at how those tiny things in the close row really grew during the intervening six weeks!

I put netting over the strawberries, which is invisible in the photo, but it’s stretched over the laths in the third row and over the strawberries just beyond the patio. There in the distance is the fully grown arugula and lettuce, some of which we have been eating for weeks, but now there’s far more than we can eat, and our horse friend Velvet, who lived across the street & might have helped, has been moved out of town because of the scary 4th of July fireworks, and perhaps is gone forever because her pasture is being converted into a city park.

Gardening is an opportunity to practice various ways of being more mature.

1 thought on “Suddenly there were strawberries!”