This is the basic picture of the 7 Sages of Greece for linking the Roman Empire to many sites.

At the top center of the mosaic is a sundial. It plays a key role in locating the height of the sun and thus the latitude of the physical locations within the Roman Empire.

The city of Alexandria, Egypt, after Alexander the Great founded it at the mouth of the Nile River in 331 BC, became the location for the greatest library in the world. This library was the center of intellectual activity for the Western world for millennia. There is a commemorative sundial (lat/lon 31.2064, 29.9148) 517 meters 117° from the center of the modern Library of Alexandria. 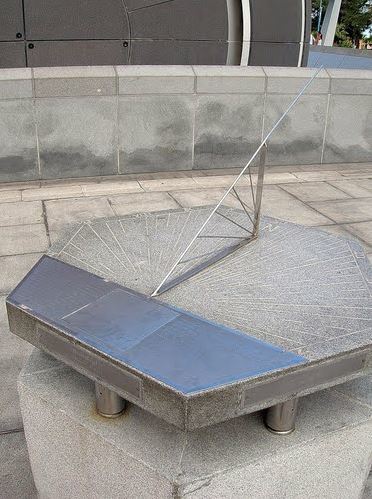 A sundial located near the modern Library of Alexandria.

It was near this library that in 240 BC Eratosthenes measured the sun’s angle above the horizon and compared it to the report of a well near Aswan on the Nile River.

He knew approximately how far south along the Nile River that well was located and by comparing the distance to the angle of the sun at Alexandria on the same date he was able to calculate the circumference of the Earth. Kom Ombo was a fortified location at the south-east corner of the Roman Empire at the time the Seven Sages mosaic was created.

Where the sundial lines intersect the Alexandria latitude lines are hot spot circles. 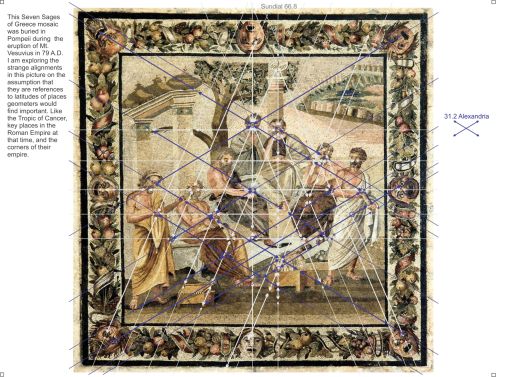 The 31.2° lines derived from this mosaic and drawn onto it in blue lines.

This map of The Roman Empire is for 54 AD, 25 years before Mt. Vesuvius erupted.

Alexandria is at the north end of the Nile River. It is between here and Kom Ombo at the southern end of this picture that the circumference of the spherical Earth was first calculated and demonstrated.

The Seven Sages of Greece mosaic demonstrates that the Romans knew the Earth was a sphere.