Our Dudley’s Bookstore writers group met at Ahonu’s and Aingeal’s.

Here is our randomly chosen prompt taken from a random book. The book was:

We – Understanding the psychology of romantic love – by Robert A. Johnson

The randomly chosen page number 33, random line 7 – it was:

“This is what forces a man to drop his arrogance and go voluntarily.” 40 minutes! (I inserted the links and corrected the dates and some minor details of the original script.)

A few minutes ago, just before coming to this meeting, I was online at Pompeii, Italy (lat/lon 40.7493, 14.4849) looking at the two millennial old mosaics covered up by the eruption of Mt. Vesuvius in 79 AD. The quest was to find anything new relating to the mosaic of the Seven Sages of the Ancient world which I had used in a post about three years ago in Philosophers Squared – 147 Delphic Maxims. I had just been looking at that image again and wondering, once again if the large globe sitting in a box in front of the sages represented the Earth. 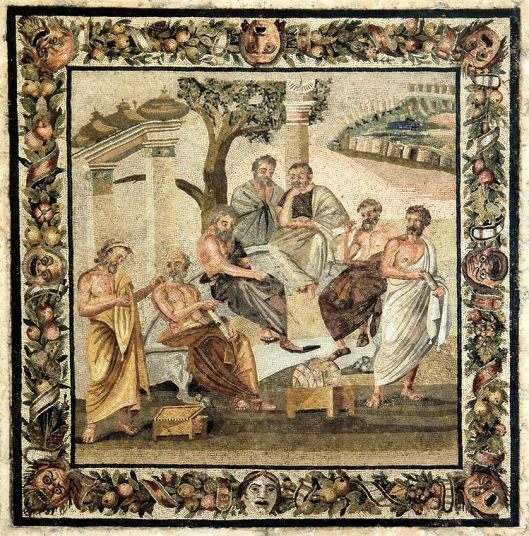 The 7 Sages of Greece mosaic found buried at Pompeii

Then it hit me as so obvious that it was a representation of the Earth because it had latitude and longitude lines drawn upon it. These lines were not idle scratches; they were evenly spaced and very pronounced black lines. Also, there was stuff on the globe too that looked like it might be a representation of some part of the Earth.

If that is true then it would seem reasonable that the artist may have chosen the stones on the globe to have tiny details that would be familiar to those sages looking at that symbol of their world. That would be a symbol inside a symbol inside of a picture which is itself a symbol inside of a computer device producing symbols of a moment in time when these symbols of thoughts were buried in the modern classic symbol of cataclysm.  This gets far too deep into multiple symbols for my simple mind and it’s things like this that forces a man like me to drop his arrogance and go voluntarily into a humble reverence for the grandeur of the existing and pre-existing world of his fellow man.

But there are more strange things in this picture of thoughtful sages. If one takes a straight edge and goes from corner to corner both ways to discover the center of the picture, the center is found to be the man’s hand with his finger pointing at the globe, and in his hand only just visible is a long stick pointing at the globe too, and the carefully arranged alignment goes straight back to that man’s eye. And, strangely, that exact point of this convergence is where the other guy’s toe touches the globe, and that line continues to another guy’s toe. Thus there isn’t any doubt that the center of attention of the conversation is the point on the globe where the lines intersect. Furthermore, when you follow the gaze of the other sages close to him, to our right, it becomes apparent that their attention is upon what he is saying about the globe. The fellows on the outer edge of the group on both sides have scrolls in their hands and that would represent the idea that these guys are spreading the idea that the Earth is a sphere. With their measurements, they would know that Italy and Greece occupy a relatively small place compared to the whole of the Earth and that implies there is much left to be discovered.

It is known that these ancients knew the exact dimensions of the Earth based on the report from Eratosthenes of a deep well in Syene, Egypt, where the sun only reflects off the water at the bottom a single moment per year. The measure of the sun’s angle on that summer solstice day allowed Eratosthenes to calculate the circumference of the Earth as accurately as possible given the limits of ancient technology. That idea is represented by the sundial at the top of the column behind the sages.

The stories about the flatness of the Earth being the common knowledge of the ancient people is proven to be false by this picture. It is so sad that the Egyptian woman Hypatia, an astronomer living in Alexandria, was murdered by Saint Cyril in 415 AD for writing about these astronomical observations.

This forces a man to drop his arrogance and become humble at the wisdom of some of his fellow creatures and at the foolishness of others.