[Click here] for all of Probaway’s EBOLA posts arranged by date. The recent posts will be at the top. 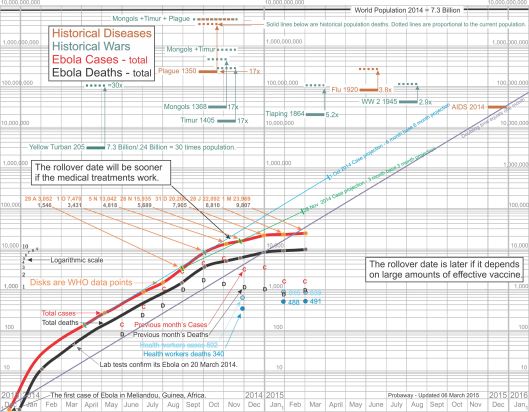 This logarithmic chart updates the deaths from the West Africa Ebola outbreak to March 1, 2015

Last month’s logarithmic chart was based on WHO data from 29 January 2015 and the one above is dated 4 March 2015. It shows the trend of the Ebola disease in West Africa is rolling over, but it is still very dangerous. That diminishing of the disease is most easily seen in the red C and the black D placed on the end of the month positions. Unfortunately, the total number of Ebola-caused deaths between those two dates, 34 days apart, is 997 (9,807 minus 8,810). That is a very large number of potential infectious persons that may have communicated the disease virus. The number of dying people was equal to the total number of infectious people back in August just before the worst of the Ebola outbreak. Ebola is a contagious disease carried only by humans and possibly fruit bats. It can be totally eliminated, but it isn’t eliminated until there are zero cases. The people who have been in contact with Ebola victims have been sought for and carefully monitored, and if they show symptoms are immediately hospitalized. If the disease is treated early the survival rate is better than fifty percent, but if treated late is worse than forty percent survival, and if not treated at all the death rate is greater than ninety percent.

The positive side of the Ebola problem is that it can be eliminated, and it is known how to do it, but the negative side is that the public, in the areas where the disease is currently active, is suspicious of the health care workers. There are many reports of people attacking the Ebola health care workers. There has now begun some large-scale testing of a possible vaccine that may be effective for preventing Ebola, but with the paranoia of the most affected people, these efforts may meet organized resistance.