[Click here] for all of Probaway’s EBOLA Posts arranged by date. The recent posts will be at the top. 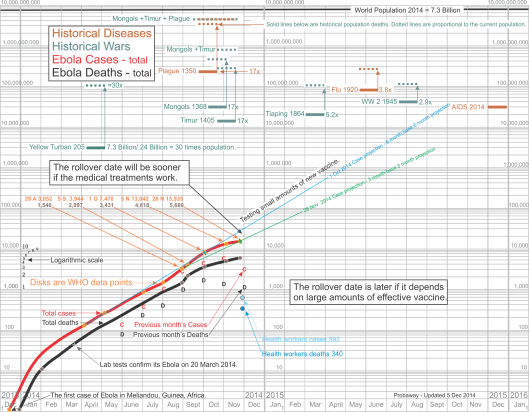 This logarithmic chart compares Ebola to deaths from Flu, AIDS, Plague, WW2, Mongols, and others. It shows past cases and deaths and monthly statistics. Click chart to make it bigger.

This monthly update of the Ebola epidemic in west Africa is sad because of the large number of deaths it represents, but it is strangely positive too. The surprising thing shown by the logarithmic type of presentation is a drop in monthly cases and deaths. This can be seen by comparing the December 1st number of Cases, shown in a red letter C to the letter C in earlier months. The black Ds represent Deaths. Although the total cases and deaths continue to rise the number of patients and deaths per month has been dropping for two months. There were still over a thousand deaths in November, but that is only half of two months ago in September.

Another positive indicator is that the large amount of money and personnel being invested on stamping out Ebola is now beginning to show. If the epidemic doesn’t explode, for some unexpected reason, the efforts now being deployed may bring this epidemic under control before next summer. That hasn’t happened yet, but if the huge effort can be maintained for a few months it might be ended. But it must be maintained at this high intensity for a while for that to happen, and any let up at this time could bring on another wave of disaster. There is another possibility that must be dealt with, and that is someone with the Ebola virus disease might have gone to another country totally remote from west Africa, and is at this moment already infecting others. A traveler might start another outbreak that might not be noticed until it had grown to where it needed another major effort to bring it under control.