The cuttlefish has such a variety of hiding and searching techniques it becomes a wonderful source for studying camouflage and for the theory of seeing through camouflage. Cuttlefish have the ability to change their skin color, texture and patterns for camouflage, both for predation and for hiding. According to Woods Hole researcher Dr. Roger Hanlon’s YouTube video cuttlefish have only three basic templates for doing this, but by blending these they have a vast repertoire enabling them to match a complex environment to near invisibility.

As I mentioned in Failures of camouflage – Symmetry all genetically driven DNA camouflage known to me is bilaterally symmetrical, and that is a giveaway for this type of surface camouflage.

Cuttlefish also have eyes with abilities which our mammalian eyes don’t, like a connection from their optic nerves directly to their skin-modifying camouflage cells. Each eye appears to have an independent influence on the skin. Their eyes have the ability to distinguish polarized light’s changing qualities. You can do this too by taking polarized sunglasses and rotating them while observing clouds against a blue sky. The ability to change views of polarized light greatly enhances definition of the objects, and when observed stereoscopically and simultaneously in various polarizations even greater clarity can be obtained. Cuttlefish stereoscopic vision is excellent at short ranges as is seen by their ability to precisely target food with bullet like tongues shot at tiny prey. 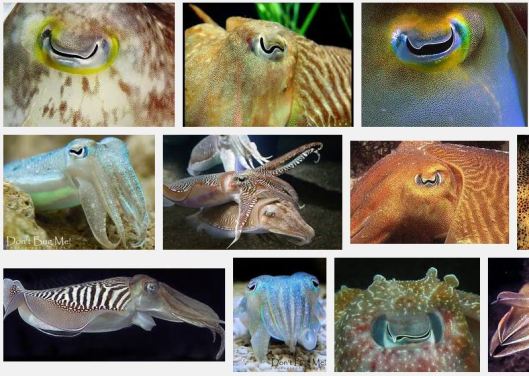 Because the cuttlefish have such a variety of adaptations they are a subject worthy of careful scrutiny for searching all of the techniques for camouflage, and possibly discovering unknown techniques. Several things accelerate their rate of adaptation. Cuttlefish have a voracious appetite that drives the constant search for food, and they themselves are tasty food, and both of those needs drive their need for better camouflage. They have a short lifespan which permits rapid DNA evolution. The fact that they have such highly developed systems suggests that they may have other methods as yet unnoticed. One factor favoring rapid evolutionary selection for adaptations is the females selecting from the large number of male suitors, by caching several males’ sperm away from her eggs and then choosing what she considers the best one for fertilization. DNA testing has shown that the sperm chosen is that of the male best able to disguise itself as a female, and thus bypass the fierce male competitions taking place near the female. The selection isn’t based on the male’s strength, or healthy adaptation to the environment, but for its acting ability. This is a process very similar to human females’  Eveish Selection process. We must watch diligently for other forms of mate ability selection that differs from sexual selection, or natural selection or  Eveish Selection

Cuttlefish are ideal for searching into the theory of unknown unknowns.

3 thoughts on “Cuttlefish and the search for unknown unknowns.”