Today Debbie and I walked up Pilot Butte, a 500 foot mini-volcano. There is a paved road for cars spiraling up to the top and a separate walking trail. The paved road is closed for winter so there were lots of people on it, because it is quicker and smoother but not so in the trees natural. I counted up to fifty people on the road and at the top over the time we were there, and then got tired counting, but there were about eight people in the hour we were on the road or at the top. We went up rather slow, partly because I am getting older, and partly because I was stopping occasionally to take some pictures with my old camera. 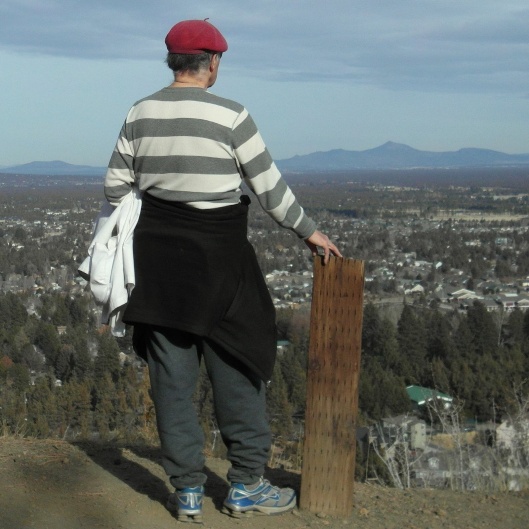 My view to the North from half way up Pilot Butte road.

Debbie took this picture. It was a warm enough day to take of my white wind-breaker and then my fuzzy jacket. The temperature was about 50°F at noon and most of the time a gentle breeze. Nice! The dozen or so runners we saw were all in shorts and T shirts and appeared perfectly comfortable. 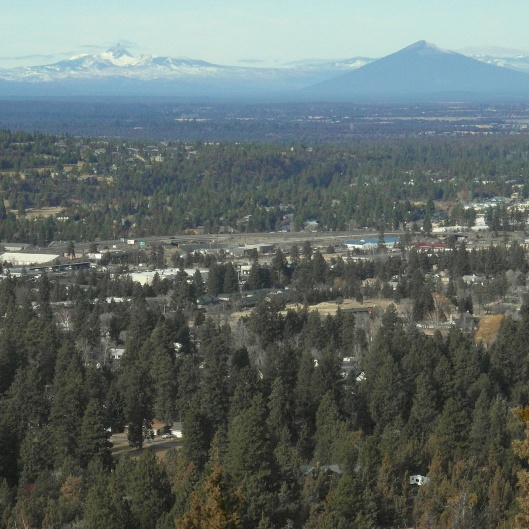 The view to the NW showing Black Butte with snow at the top.

This picture shows our house in the little meadow amongst the pine trees. After idling about for a while, looking at the scenery, Debbie read a couple of pages to me from The Afterdeath Journal of an American Philosopher; The View of William James, and we headed back down. 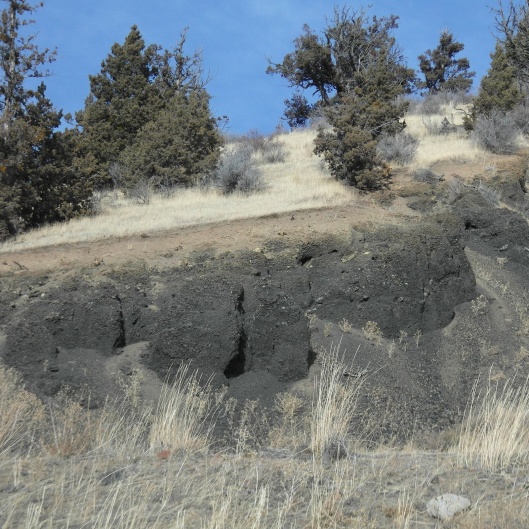 Some exposed rock from the abandon gravel-rock quarry.

Near the bottom of the butte, near the closed gate, there is this view straight down Highway 20 / Greenwood Avenue. Downtown Bend is a the other end about a mile away.

A view down Greenwood Ave in Bend Oregon from near the gate.

After we finished some business downtown, we went to Dudley’s coffee shop for a snack, and outside I took this long-arm picture of myself with a silly visual joke. 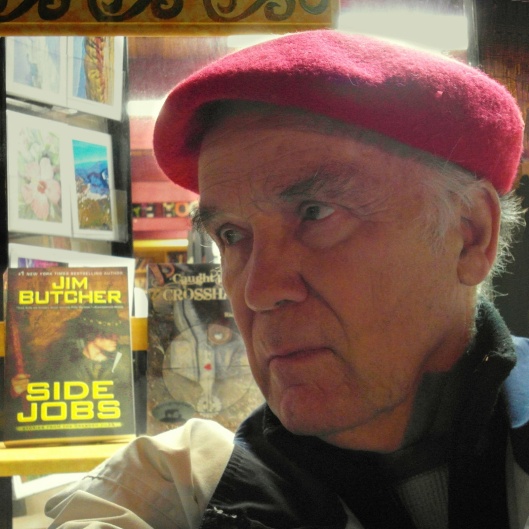 Charles Scamahorn in front of Dudley’s in Bend, Oregon

A few minutes before this we were walking along the Deschutes river at Mirror Pond, which surprisingly was partially frozen over. A gaggle of ducks came running over the ice hoping for a treat, which is illegal to proffer, and I made a beautiful movie of them. Unfortunately, I didn’t press the right button and all I got was a beautiful view on screen but no recording. We did have a cup of great coffee and a pleasant bit of repartee with the passing patrons and barista.

Life for us in Bend has been like this for us most days.

2 thoughts on “A pleasant walking day in Bend, Oregon”