There has been a surprising amount of high drama with the animal life near our home here in Bend, Oregon. The first few days what I noticed most was the domestic animals because they were right out the front window, only a few steps away. At first it was four miniature horses who were fascinating to watch for short spurts because of their antics, but they were replaced a few weeks after our arrival with five white lambs. Then, after a couple of days, two black lambs were added to the fold. The lambs’ adaptation to each other was slow. They did form a flock but the two colors always kept to separate sides of the flock. They were as interesting to watch as the miniature horses had been but were very different. These lambs adapted to their  field in a couple of weeks, and began roaming more loosely but then, for the lambs at least, a traumatic event occurred. Seven full grown sheep were introduced to the field. The various sheep were instantly interested in each other and recognized each other as of a similar species. They formed a more or less single flock immediately. But even after a month of being together they remain semi-separated into their original subgroups almost all the time, and the black lambs as a sub-sub-group. There hasn’t been any head or body butting since the first day, so I guess they worked that head of the flock thing out.

There have been lots of other animals, and we did see a deer only a block away, on a leisurely walk through the local semi-forest – there is a loose mix of houses and forest so it’s easy for a deer to walk from one forest zone to another. I don’t know the range of our local squirrels, but there are at least ten gray ones living close by, because there were that many at one time having an amazingly wild party in the ponderosa pine tree across the street and then on our roof. Robins are in our backyard almost all the time, pulling up worms, I guess; they are almost always busy. Starlings, flickers, and jays come by several times a day. I don’t know what they eat, but they seem to have a good time poking about in the grass. The doves in the trees set up quite a mellow racket in the evening, and the local frogs a more raucous tone. There were a family of hawks, as big as chickens, living at the end of our block, but I haven’t seen them for a few weeks, so apparently the little ones learned to fly and have moved on. A mole was making a mess of our backyard, so I went after his burrows with a pick and he seems to have taken the hint that he’s not welcome, and departed. 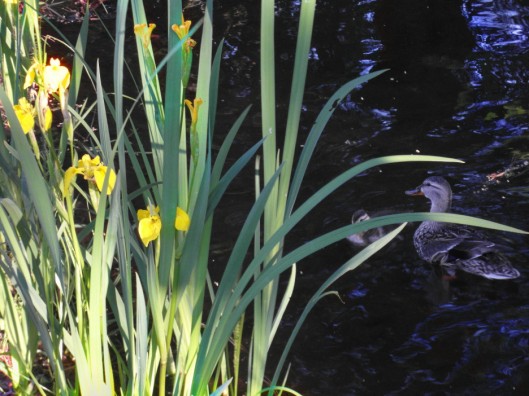 A duck and her duckling hiding in our local irrigation ditch.

We don’t have a yard to the liking of the mallard ducks, so we must walk a couple blocks to visit our local ducks and their ducklings. They live in a small irrigation ditch that meanders for a mile through the forest on the flanks of the hopefully extinct volcano, Pilot Butte, which casts its shadow over our house early in the morning. The Canada geese seem to prefer the Deschutes River for their hangout, but we prefer our comfy home.

Our new life in Bend has been filled with many wild adventures.

2 thoughts on “Our wild life in Bend, Oregon”