Human beings emotions go through a typical path of development relative to the discovery of a new idea. This post will explore that path from searching for the seemingly unknowable through the various stages which have been documented by others. It will follow the bubble chart by Jean-Paul Rodrigue, Dept. of Economics & Geography, Hofstra University as a starting point. 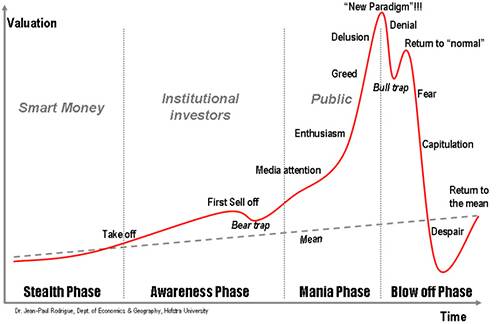 A graph showing response from take-off – first sell off – media attention – enthusiasm – delusion – ecstasy – denial – fear – capitulation – despair – acceptance – return to the mean. This chart was developed with the ideas being explored as investment opportunities for the publics money but I am thinking of it with more generalized applications for all ideas. One can quibble with any of the specifics but the general trend of the ideas make good sense. One quibble I would make is the dashed-grey line labeled the mean which would seem to be better drawn as a flat horizontal line just under the words Bear trap. In that position the public valuation of the idea at the end would still be well above the pre-take-off phase because it has been proven to have some validity and the  mean line would intersect the valuation line again at Return to the mean just below where it is drawn. That would imply the public has returned to having some value to the idea somewhat above its takeoff phase. In that earliest exploration the public will totally disparage an idea. Mahatma Gandhi said,

This formulation only gets one up to the enthusiasm stage but it points out the problem that a new idea doesn’t have a small value with the public, it has a negative value. After the over-exuberant phase there is a crash and a total vilification phase the idea drives its value even below the original non-acceptance of a new idea. After a while it will return to a reasonable acceptance condition of general knowledge which should be graphed as a little higher than its first starting point of acceptance.

After the blow off phase of the bubble chart of an idea the Stages of Grief charted by Elizabeth Kübler-Ross seem to be applicable as an appropriate follow on. It starts with what is labeled normal functioning but when applied to the previous chart it would begin at the Enthusiasm or even Delusion phase as if those are considered normal.

The Grief Cycle comes after the fall from the good times.

The terms in the chart Normal functioning and Return to meaningful life could be replaced with the term librating. It can be used to mean oscillating predictably about some knowable mean value. The unusual word librating is a clearer statement of the typical flow of daily living than the statement Returning to meaningful Life because the Grief Cycle is clearly a meaningful part of life, it’s just an unpleasant one.

There are things which can be said about the time before the Bubble Chart when people are searching for better ways to understand and use previously unexplained phenomenon. These types of searches are difficult or even impossible for most normal people because they seem to be without clear direction to an easily conceived goal. When these newly found understandings do become known to the public a bubble of irrational exuberance begins to form and if promoted it explodes and soon people develop beliefs beyond rational credibility. It works for some people because they can see the obvious success the idea has produced so far and the wonderful results it has given to those who followed it and they believe therefore it will continue expanding forever. That leads to an eventual overshoot of the ideas natural validity and a collapse and then the grief part of the whole experience. Loss of something dear to person is a common event and if that person has the illusion that the something is very valuable and will last forever it will be a particularly intense grief cycle.

However, overshooting the evaluation of ideas is a good thing, in the long run for the public, because one never knows the limits of ideas until they have been exploited to where they clearly exceeded their true objective value and negative effects have become overwhelming. Sometimes when individuals are well beyond the former known limits of something new ways are discovered for coping with the unexpected problems which arose and further progress is attained which was well beyond what was formerly thought possible.

Those who timidly creep slowly up to a perceived preexisting limit will always be surpassed by those who boldly go forward. Some of these adventures will go far beyond good sense and fail spectacularly but some of them succeed and they will be the ones who will reap the big rewards. The timid will inevitably be left with only a little a creeping progress of the whole group. They are the common heard and have developed the ability to survive in the safety at the center of the heard. The predators pick off only the injured and feeble outside of the heard and the adventures are outside of the heard and quite often get injured in their over zealous pursuits. It is dangerous to go outside of known reality.

Perhaps everyday life is filled with these kinds of discovery events and because we live in a blend of a great many of little ones, none of which are overwhelming, we have seemingly meaningful and productive lives. We learn to take risks with which we feel we can cope and avoid those that might be beyond our ability.

The Black Swans are waiting with plentiful rewards or death.