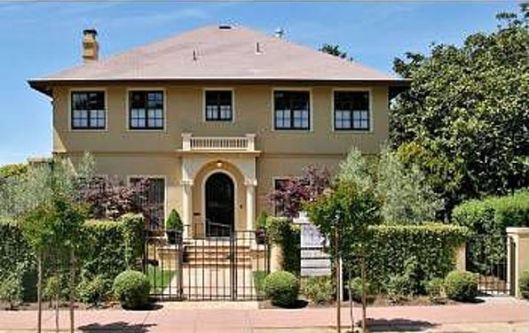 A beautiful 1923 Berkeley home was seen on Zillow last year for only 2.2 million dollars.

[update 2010/08/30 includes detailed quake map of this area]Seen above is a pretty pile of 1923 housing construction at 878 Arlington Ave Berkeley, CA [Update: 2011 Zillow estimate $1.1 million down from $1.9 million][Update 2014 Zillow estimate $2.16 million] 94707 (located at 37.8924, -122.2747) which arose after the catastrophic Berkeley fire of 1923 pictured below. My close friend for decades, Bob Westerburg, lived as a child in the forth house to the left down Scenic Ave. He was born a few years after this picture was taken. I mention it to show just how real these problems can become to us and our friends.

The even bigger Oakland fire of 1991 which took out over three and a half thousand residences, I knew some of those people too, but that fire missed the one pictured above by a couple of miles but there have been many other multi-home fires in this fire prone area.

Berkeley Fires – The house is by the word Grizzly. The UC Berkeley campus is beneath the 1970 label

The old house, being discussed, hasn’t been hit yet by the Hayward earthquake fault which runs directly beneath it but it is a 100% likely geological event. It’s inevitable like sunrise tomorrow, but unlike sunshine the quakes can reduce this whole area to rubble in a few seconds. It last popped in 1868 with a Richter 7.0 and geologists say, by looking at the angled displacement of Strawberry Creek, which crosses the fault, that it has had a historical movement rate of about one shift in about 140 years. You do the math. This house was jolted by the Richter 7.0 Loma Prieta quake of 1989 which killed many and took part of the San Francisco Bridge out for a month, and collapsed a double decked freeway. But, that quake was 63 miles away. It remains to be seen what a similarly powerful quake would do right under it.

The beautiful house pictured at the top is in the black stripe, near the top center.

When it rains heavily, which it does occasionally there are potential catastrophic landslides but these hills are creeping all the time.

Landslides in the Berkeley, Albany and El Cerrito hills

The  beautiful multi-million dollar house we have been following is right on the bottom edge of the center red landslide which is labeled as currently sliding.

This exact area has a very good crime report, in the Neighborhood Scout ratings. However it is located between areas of the worst possible ratings. During a time of serious trouble, such as an earthquake, those criminally minded people might decide to take advantage of a few days of temporary laxity of civil constraints.

Having covered some of the questionable qualities of living in Berkeley and in a particularly nice house in the hills it would only be fair to compare it to some less desirable abode. Say, 3521 Vistapark Dr, Caldwell, Idaho 83605 (at 43.6673, -116.6546)

A very large new home listed for sale on Zillow in Caldwell, Idaho

This place is nearly new and huge at 3,555 square feet (plus a triple garage?). The trees are planted but not yet grown and everything is not so pretty as the 87 year old Berkeley house. But it costs only $107,000 verses $2,200,000. [Update: Sold Aug 1, 2010 for $113,000][Update 2014 Zillow $156k] That is one twentieth the money. Yep 1/20th the cash. You could buy a couple of blocks of similar Caldwell giant houses for the price of that one beautiful Berkeley house. The Berkeley house isn’t even as big only 3,172 square feet versus 3,555 which is 11% smaller. Also, it doesn’t have much of a garage so its owners must park their cars on a very busy street. Whereas the Caldwell house has a triple garage for a camper, boat and car and considerable off street parking.

So, what you get in Berkeley for that huge amount of money is,  access to more cultural events, access to a great university, more opportunity for better paying jobs but those things are available to the area and not exclusively this particular very expensive house. With this house itself you get great architecture, a wonderful view, mild weather with occasional fog, but even these things can be had much more cheaply a mile to the west on Albany hill.

Oh, I should mention, that since the last big fire the local people have planted the whole East Bay in decorative trees which are now looking quite large and beautiful. Riding on the elevated BART train through this city is like flying low over a beautiful forest. These are the same people who make a big fuss about the dangers of global warming but strangely they choose to live on the top of multiple catastrophes primed and waiting to explode. And even stranger, they do all they can to make the coming catastrophes worse. But, it is beautiful while it lasts and who needs all that calm?

What you get in Caldwell is a much bigger, newer house, for vastly less money, more interesting weather with four distinct seasons, a safer more relaxed social environment and little worry about catastrophic earthquakes, urban forest fires, social upheavals, floods and landslides.

Obviously Berkeley is twenty times better or people wouldn’t be paying the big price to live there.