The instant you even think you may be having a heart attack take two aspirin. That requires that you have the aspirin available and I have been recommending to my friends that they carry aspirin with them at all times. Men almost always have their wallet with them and can get to it in a few seconds so their wallet is an excellent place for them to carry their emergency aspirin. I had been carrying mine in my eyeglass case but recently it fell out of my pocket and was lost. I have never lost my wallet so it is probably a more reliable location for my emergency aspirin.

Here is an easy way to put four aspirin in your wallet. Lay the pills out in a line on a piece of scotch tape touching each other and then wrap them across the line. Leave a half-inch of tape extending to each end taped to itself to form an air tight seal then cut a small V-shaped notch into each end. These are for opening the aspirin container quickly. 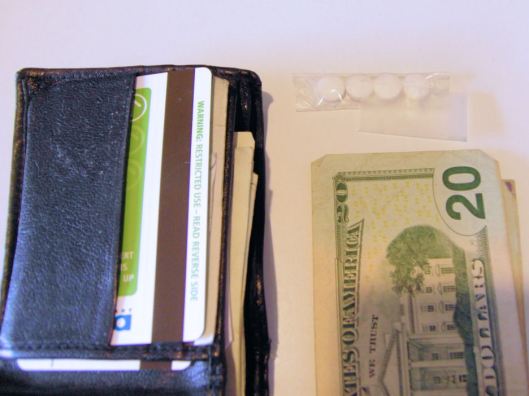 Four aspirin wrapped in scotch tape beside my wallet.

They are convientiently placed at the extreme end of my wallet and held in place with another piece of scotch tape. The end of the tape was doubled back on itself a quarter inch to form a grip for easy removal of the little package. 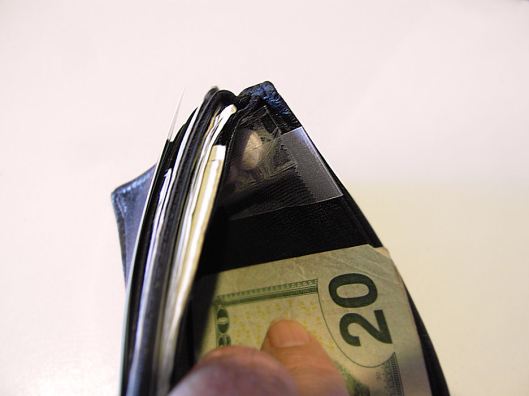 The aspirin packet pushed into the end of wallet and taped securely.

For more information on why to always have aspirin instantly available see:

You can survive a heart attack with two aspirin taken instantly.

How to survive frostbite to the fingers and toes.

(I am not enthusiastic about taking aspirin every day because it causes bleeding. I suspect that the statistically beneficial effects from its frequent use are because the heart attack victims just happened to take the aspirin when they were having an attack.)