Proceed at your own risk! These optical illusions can cause temporary hallucinations and no one knows how this may affect your future brain functioning. So far the only effect I have noticed has been the rapid departure of migraine auras but why that happened I have no idea. Perhaps it was greater blood flow to the optical centers. With such a strange effect having been observed with these experiments one must be cautious and self observant. I have noticed that my forehead gets hot after a half hour of doing these eye-exercises. That appears to be some sort of enhanced mental activity or perhaps just plain brain-friction.

The first red-green blend at the top is the easiest to do. First place a pencil near your computer screen with the tip between the two dots and a few inches out from the screen. Then with your eyes focused on the pencil tip, slowly move the pencil toward your face until the two dots overlap because your eyes are crossed. Hold the pencil steady there for a couple of seconds with your mind fixed on the dots to fuse them and then slowly lower the pencil out of sight. You can learn to do this in a few seconds with several tries. When the two dots fuse, hold still for a few seconds, with your attention on the dots, then slowly move the pencil down and out of sight. Keep staring at the dots and in about ten seconds strange optical illusions will begin to appear. One of the first is for the two fields to meld into a smooth silver field. Then there will be a drifting around of the colors between greenish, yellowish, reddish and greyish appearance. This is almost goes unnoticed until you say out-loud the color you see behind the dot.

These targets give the most remarkable flashing effects with the outer disk flashing between vivid green to vivid red with every silver tone in between. 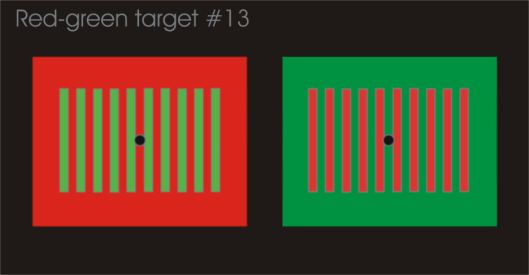 Cross-eye experiments with many red and green bars

I made these more detailed bars with the hope of strange effects but it seems to be too much for my brain to fuse and I just see vivid red and green bars on a silver-yellow field.

With the thought that the ten bars were too much for my brain I made a similar picture with only three bars and then softened the edges. This picture sometimes gives the strange effect of a vivid red bar directly above the dot and a vivid green bar below the dot. But how can that be when the lines are otherwise identical and why should up or down change the color so vividly? Sometimes the entire field goes to a smooth yellow-silver and the bars almost vanish. I have seen the center bar vivid red and the identical side bars vivid green on a silver field.

If the two dots do not fuse because they are above one another like a semicolon : try slowly rocking your head side to side. Other strange effects can be had by slowly moving your head toward and away from the screen which may change which eye is dominant. Another experiment is to slowly move a pencil across the field, at your cross-eye distance, and notice that moving it up and down produces very different results from moving it across the field.

What’s really in your mind is more elusive than Schrodinger’s cat.

4 thoughts on “Experiments with your eyes and brain #5”