Sir Ignatius Arthur Conan Doyle was the author of the wonderful Sherlock Holmes stories but he was also the infamous serial killer Jack the Ripper. Unlike most people he liked to dramatize his homicidal tendencies and in a letter to his mother upon graduation from medical school he claimed he had a license to kill.

Conan Doyle claims he is licensed to kill. ha ha

This same jocular attitude is seen in his Dear Boss letter. It goads the police and their ineptitude. He also gives the world the colorful nom de plume, Jack the Ripper and the repeated ha ha with the underlining both times for emphasis. 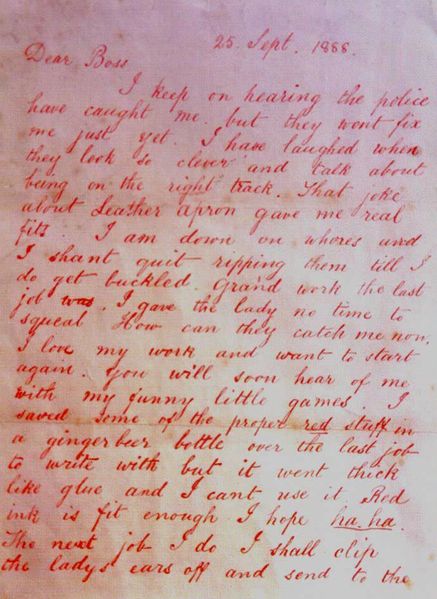 The most famous words in this letter, ( Jack the Ripper, Dear Boss and ha ha ), are Doyle’s personal name slightly encoded. The initial letters of his name Ignatius Arthur Conan Doyle, and the word Doctor, easily converts into — Jack the Ripper, see below. He rarely used the name Ignatius but it was on his birth certificate.

This requires a bit of clarification but the English letters I and J are often interchangeable as in the spelling of Jack as Iac, thus JAC is equivalent to IAC Ignatius Arthur Conan. The initial letter of Doyle is D and because the word the is pronounced and spelled d or de in most European languages The Ripper becomes D Ripper. Medical surgeons are sometimes jocularly called rippers. Conan Doyle was a practicing medical doctor at the time of the Ripper murders. And the letter goads the police with the post script, They say I’m a doctor now ha ha. Well he was a doctor and he had a self proclaimed license to kill and his name fits the funny little word games.  IAC D Doctor is JAC D Ripper

When Doctor Doyle died his grave stone ( at +50.896, -1.602 ) left little doubt about his sharp knife and funny little word games and interesting letters.

5 thoughts on “The real Sherlock Holmes was also Jack the Ripper.”