Charles Darwin set in motion controversies in 1859 which are still causing waves. This is as it should be, because a really good theory should be so fundamental that it will stretch the minds of people for a long time. I am more enthusiastic about the intellectual creations of Alfred Russell Wallace’s in getting the ball rolling but without question it was Darwin which gave it the tremendous kick which wasn’t available to Wallace. Wallace was a great genius but without money and connections he had no power to make things happen. Darwin had the abundant money and the very best connections and a track record of spectacular research and a very popular and readable book, The Voyage of the Beagle. Wallace in the 1840s had made great efforts in the Amazon to discover the causes of evolution but the gods frowned upon him and his ship sank in mid Atlantic on his return and he floated about the ocean for a couple of weeks. He lost all of his specimens and manuscripts but not his life. So he set off on another trip to southeast asia and while there came up with the ideas which terrorized Darwin and forced him to publish On Origin of Species. Wallace published an excellent book The Malay Archipelago which was done at the time he wrote his fateful letters to Darwin.

Today I attended a lecture by Terrence Deacon a renowned professor of Anthropology here at UC Berkeley in hopes of hearing the latest in the developments of evolution and in particular human evolution. Deacon has published various researches on this subject and I have posted several blogs on it and I was hoping to have a few minutes talk with him after the lecture if possible to see what he thought of my ideas of human artificial selection. I knew that he was a long time friend of Len T whom I have known for some forty years, but I had never met Deacon. But first I was interested in what was new and therefore was at his lecture called . Emergent Evolution: How completing Darwin’s unfinished synthesis may reunify anthropology: (Anthropology Fall Colloquium). Early in his presentation he had this slide which purports to show Darwin’s conception of sexual selection by women. Which was exactly what I wanted to talk to him about. 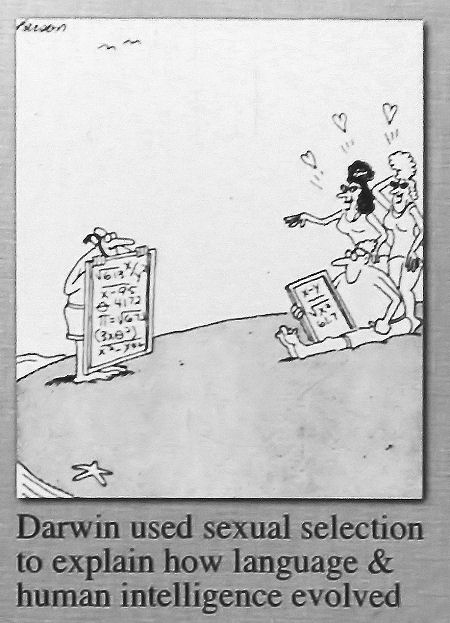 Women choosing a guy for his mathematical ability.

I believe that that conception is so wrong it is comical and Gary Larson points this out rather well. A much more likely selection procedure for women would be their conversing about who is the best man and then making a group decision. Thus, it becomes artificial selection. That is it is a verbally driven selection procedure and as, without doubt, some part of the verbal quality is heritable it would grow more heritable with each new generations reiteration of the selection procedure. 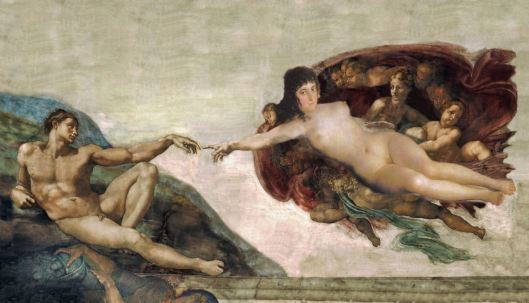 Eve chooses Adam with a little help from her friends.

After the lecture there was a reception where I was able to talk to Professor Deacon for a few minutes and we attempted to convince each other of the validity of our positions. 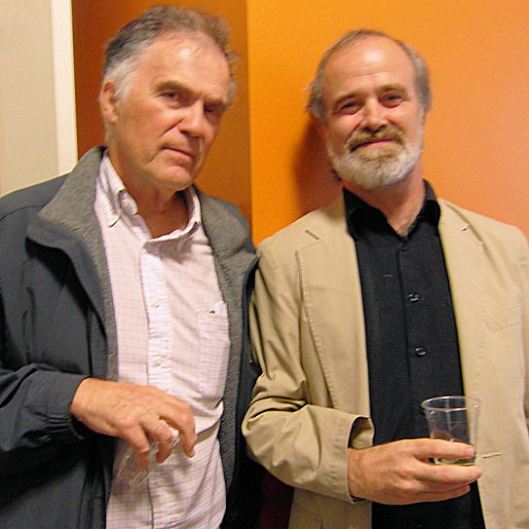 We had a very friendly and animated conversation.

Of course he has the power and prestige of Darwin and I have that of Wallace  or Patrick Mathew but it was fun. He has a new book soon to be out and I have my blogs on evolution.

Intelligent Design – of humans by humans and for humans.