This picture of my two year old 10 megapixel Casio was taken with this new 15 megapixel Samsung seen below. 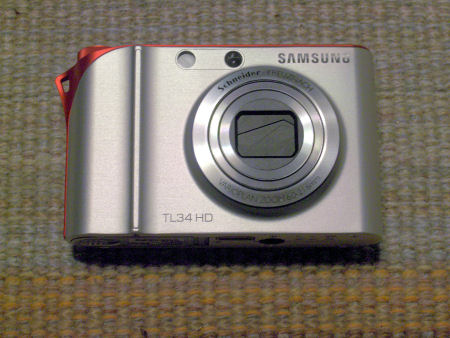 My new 15 megapixel Samsung TL34HD taken with the Casio

The above picture of my new Samsung 15 megapixel  TL34HD was taken with the old Casio EX-Z1000 . Both of these cameras are about the same size and fit into the same snug camera pouch which will fit nicely into a shirt pocket. With just a little bit of experience with this new camera I would say that everything is about 50% better than the old one. Better resolution, better zoom, better viewing screen, better night sensitivity, better movie mode and—quite important—better control of the options. Each icon has a short description that pops up, which will help while learning the controls. The touch screen is nice but one wonders how it will hold up to many finger touches. The movie option can make a high quality HD movie and comes up into operation about three seconds after picking up the camera, which is about twice as fast as the Casio. On the other hand, saving pictures to the 16G removable SD card seems noticeably slower although part of the reason for this is that the files are bigger. If I set the size option to a lower resolution it is a bit quicker but not much.

The photos above don’t show the clarity of either camera’s pictures because with the resolution available on both being so high it wouldn’t show up with much under a ten by magnification. One good feature of the Samsung is the ability to zoom into a taken picture right after taking it more quickly than the Casio. This is helpful to verify there was no camera motion and the critical parts of the picture were in focus. There is a dual anti-shake option on the new camera but it didn’t seem to make up much for not holding the camera still in the first place.

So far there hasn’t been a problem with the placement of the controls on this new camera but on the old Casio there was always some confusion with the top buttons and I always had to look at their function icon to hit the right one.

As you can see from the photograph I modified my Casio by gluing a finger loop onto the camera in place of the usual string wrist strap which never worked for me. The finger loop works really well and I never worry about dropping the camera or whacking it against something when it is dangling from a string. Another advantage of the loop is that it permits me to withdraw the camera from its holster much more easily. I intend to put one of these onto this new camera right away.

There is one problem with the Samsung and that is the button to the lower right of the screen will turn the camera ON accidentally when it is bumped, even when it is in the holster. I intend to glue a small elevated ring around that button to prevent these accidental events.

So far I am very happy with this Samsung TL34HD and consider it a worthwhile upgrade on my old Casio EX-Z1000 with which I had taken several thousands of shots and which I really like. Over the years I have used quite a few cameras; click here to review some of my personal camera history and some experiences.