There are many places in the world where the Gene Barrels can and should be placed, but one of the best is around the South Pole. It is very cold there, about minus 50° F or C and because it is so cold most seeds will be viable for a very long time, even a thousand years, and perhaps much longer. Furthermore they should be safe from radioactive fallout whenever an atomic war occurs, and from all living predators, even people. Each Gene Barrel has so little food value in their stored seeds that even starving people wouldn’t bother to try and go there. Only people with the intent to use the seeds for replanting, and regrowing a destroyed planet Earth would bother to go to the extreme effort of getting to this seed storage site. It is the most remote location on the planet. To help organize and separate the various barrels they could be placed in a logical pattern around the South Pole. Then not only would they be cold and isolated from one another, and from people, but they would also be easy to locate because they are placed in locations that are related to where they came from directly back up north. They would be put into the map of the places from which they came and  thus be presorted to the probable places of their own eventual redeployment. 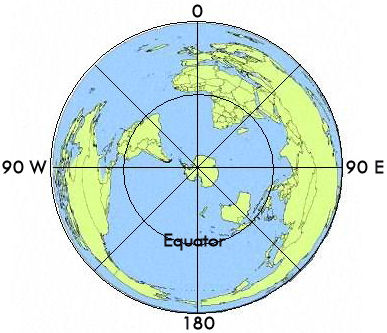 This is a polar projection map for the South Pole seed sites. The plan is to place the individual Gene Barrels from their source sites from around the world into locations around the South Pole. These placements are based upon where they came from. If our 1/100 scale map of the South Pole region was centered at the South Pole on the physical Earth then the Equator would be defined as 100 kilometers out from the South Pole. On this map a barrel from London, England would be located 160km from the pole at 0°. And a barrel from New Orleans would be at 90°W and 135km from the pole. A whole world of seeds from around the world would be created in miniature in this frozen space around the South Pole. Very few barrels would be within 50km of the South Pole station so they wouldn’t be interfering with any operations there, and they are far enough away from any people that vandalism shouldn’t be a problem. The cost of creating this Gene Barrel site would be spread around the world to whoever wanted to help save humanity, and help their future grandchildren in their local area and the local people recover after a major war. Shipping costs to the South Pole station and the cost of the barrel’s movement out to their storage locations would have to come from benefactors. It would be about $200 per small barrel once this program was flowing.

2 thoughts on “The Gene Barrel distribution around the South Pole”