Last week I spoke to Talal Asad after his lecture about my special interests in the socialization of smell and he suggested two books for me to read. I just finished Orality & Literacy: The Technologizing of the Word by Walter J. Ong (1982). The other book he recommended to me was The Foul and the Fragrant: Odor and the French Social Imagination by Alain Corbin, which arrived today via Link Plus the inter-library loan service, more on that in a few days. 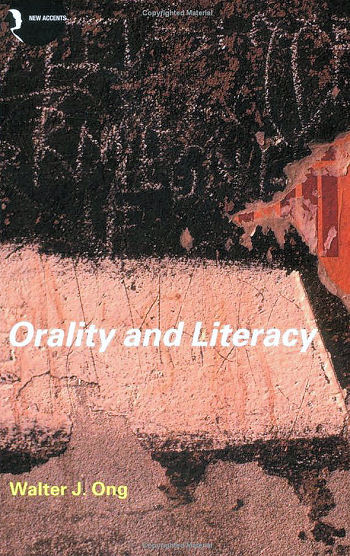 Click the picture above for an Amazon link with a few pages of reading of the original text or for click here for a quick overview of the book from Northern Illinois University, Department of English.

Orality & Literacy concerns itself mostly with the transition period from orality to literacy in the early Classical Greek period. Ong expects the reader to be quite familiar with Homer, Socrates and Plato. Homer was at the very beginning of the transition to literacy and Plato when the transition is in full flow. The patterns in Homer’s thinking are of the oral style and those of Plato of the literary. However, even Plato’s thinking does not have the fixity of the modern printed, word but more the immediacy and flexibility of the handwritten word. The modern published word has a quality of permanence of itself on the paper and in our minds, but the words of Homer would have had more the quality of the moment and, a vaporous nowness of a spoken story.

The characteristics of the preliterate oral style of thought and expression are as follows:
1. Expression is additive rather than subordinative.
2. It is aggregative rather than analytic.
3. It tends to be redundant or “copious.”
4. There is a tendency for it to be conservative.
5. Out of necessity, thought is conceptualized and then expressed with relatively close reference to the human lifeworld.
6. Expression is agonistically toned.
7. It is empathetic and participatory rather than objectively distanced.
8. It is Homeostatic.
9. It is situational rather than abstract.

This subject of consciousness is a perennial topic and was very hot at the time this book was written. Julian Jaynes, Origin of Consciousness in the Breakdown of the Bicameral Mind (1970), which came out twelve years earlier, was still being discussed. My friends are still very aware of this book and can make a good defense of its premise. Ong contends that Jaynes’ theory is needlessly complex, and untestable with its dependence on hallucinatory ‘voices’. Modern science can now look at brains in action with CAT scans, and similar devices, and can observe where oral people process information, and compare it to where literate people do. Ong contends in the end bicamerality may mean nothing more than orality.

2 thoughts on “Orality & Literacy: The Technologizing of the Word.”