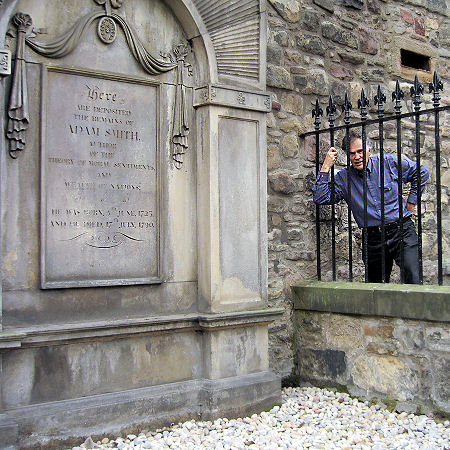 Adam Smith’s invisible hand and Charles Scamahorn’s all too visible one.

Adam Smith (1723-1790) was one of the clearest thinkers ever produced by humanity, and perhaps his method of approaching problems might help us get a grip on how to cope with this modern problem of super weapons, and humanity’s current rush toward Doomsday.

Let us suppose that the great empire of China, with all its myriads of inhabitants, was suddenly swallowed up by an earthquake, and let us consider how a man of humanity in Europe, who had no sort of connection with that part of the world, would be affected upon receiving intelligence of this dreadful calamity. He would, I imagine, first of all, express very strongly his sorrow for the misfortune of that unhappy people, he would make many melancholy reflections upon the precariousness of human life, and the vanity of all the labours of man, which could thus be annihilated in a moment. He would too, perhaps, if he was a man of speculation, enter into many reasonings concerning the effects which this disaster might produce upon the commerce of Europe, and the trade and business of the world in general. And when all this fine philosophy was over, when all these humane sentiments had been once fairly expressed, he would pursue his business or his pleasure, take his repose or his diversion, with the same ease and tranquility, as if no such accident had happened. The most frivolous disaster which could befall himself would occasion a more real disturbance. If he was to lose his little finger to-morrow, he would not sleep to-night; but, provided he never saw them, he will snore with the most profound security over the ruin of a hundred millions of his brethren, and the destruction of that immense multitude seems plainly an object less interesting to him, than this paltry misfortune of his own.

I hadn’t remembered this Adam Smith statement until this search, but it’s apt and perfectly related to our Doomsday predicament, because it shows clearly that if any idea no matter, how momentous can not be made concrete, and immediately applicable to a person’s life, they will either ignore it altogether or give it a sentimental lip service, and go on about their trivial affairs. At another time Smith says:

Every man is, no doubt, by nature, first and principally recommended to his own care; and as he is fitter to take care of himself than of any other person, it is fit and right that it should be so.

This of course is also true and therefore the problem of impending Doomsday must be made clear as applying to our common man personally. Of course nothing is more difficult to show to someone than something that has never happened before, not a single time in the entire history of humanity. Therefore, it is easy for a perfectly intelligent person to see all of the relevant facts, and be shown the relationship of the facts to each other, and have demonstrations of how similar facts, and relationships have led to certain conclusions, and yet remain unconvinced. Furthermore the Doomsday thing is so dreadful they that they choose to believe that neither would anyone ever start such a thing nor would God permit it. Perhaps, I am more concerned with these issues than others because I have personally known people at every major step of the entire process, and can see each of these decent, and very sane people doing their part—which in combination will bring on these hideous events—in a wonderfully competent way. And then we come to this quote:

What is prudence in the conduct of every private family can scarce be folly in that of a great kingdom. IV.ii.12

It seems that people can behave with perfect prudence, and in every way be the most honorable, and most honored of human citizens and still bring on disaster. I have puzzled over this super weapons, exploding population, imploding resources problem all sorts of ways trying to get a workable handle on it, and as unlikely as it seems the best solution so far is the Lifehaven Project followed up much later with the enactment of The Vital Laws of a high tech humanity.

5 thoughts on “How Adam Smith’s invisible hand might help us avoid Doomsday.”