NASA has triumphed yet again!

These guys are to be revered as Gods even if they are mere mortals, and belittled by all sorts of silly people. They have gone where no man has gone before, and they have done it again, and AGAIN and AGAIN! This appears to be another beyond perfect mission in the making. Don’t hold your breath, though, because many things can still go wrong. Breath, slowly, naturally, and get back to doing your life task. 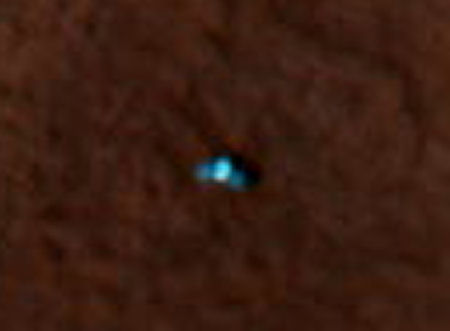 This is a cropped image taken from the NASA published photo of Phoenix sitting on Mars. Being a raw photo it can be improved, and made much easier for humans to view. NASA hesitates to do much clean up on their presentations, as they should, because they want their data to be available for others to work on. Clean and unmanipulated. If it were enhanced then those using that data wouldn’t have any idea what was real and what was enhancement. However, that being said, here is a very easy enhancement to the above photo using only an inexpensive Corel Paint Shop Pro X program’s most basic tools. 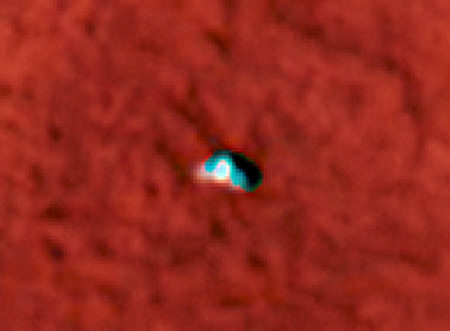 The only thing done was to crop the original photo to this area, then do Gaussian blur it a bit to smooth out the extreme pixelization, then to do an automatic Smart Photo Fix. This ended up with a worse photo in some ways but it did reveal the vehicle’s outline better and surprisingly it showed a shadow of the craft prominently which in the original had been invisible. 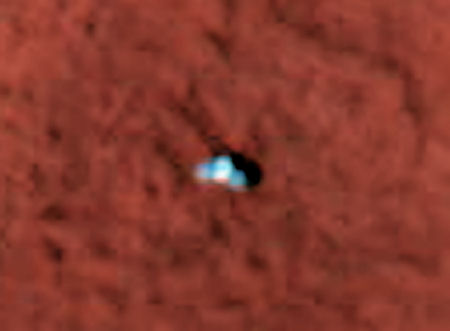 In this version the cropped image was enlarged eight times to get many more pixels to work with and then a Gaussian blur set to 3 which smoothed these pixels out while still leaving some detail and then doing a Smart-Photo-Fix. The automatic setting was tweaked a bit to be 49 brighter, -100 Shadows, 0 Highlights, +8 more colorful, 86 sharper. Then the image was resized back to a web friendly 450 pixels wide. This may seem obscure to someone totally unfamiliar with photo programs, but really it is first hour skill level. Mostly just tweaking what is visible with slider bars.

Notice that with even these simple procedures this photo taken from NASA is improved. Others with more access and better equipment should soon have some really great views.

Go to the Phoenix Main Page for the latest fabulous stuff.

3 thoughts on “Phoenix sits on Mars”