What I propose, and would like to see implemented on my future browser, would be a string of thumbnail pictures of the sites in a horizontal line underneath, (or beside the current go-back / go-forward arrows). These would be tiny screen shots of the sites which are made on the fly by your computer while you visit the various sites. They would be posted to this visited line as soon as you go to that site. The one which you are currently at would be outlined in green to symbolize its current active status. When you want to go back to a previous site you would have an easy to interpret little picture to click on. You can easily remember it visually because you were just there. This is much better than the text line which is now presented under the usual tiny drop down arrow which has an obscure meaning unless you happened to have read the site name.

For example: let’s say you went to Google and searched Casablanca and it comes up with some seven sites which you clicked through. Each of these sites pastes a thumbnail at the top while you view them. You end up at the seventh site with seven thumbnail pictures. If you came back one to the sixth site you would see on your screen the thumbnails as presented below … 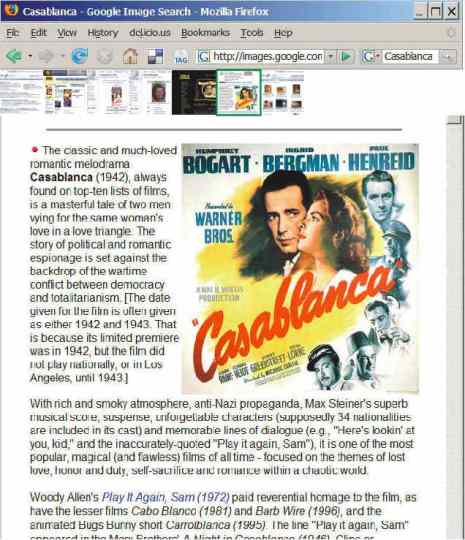 You can see the thumbnail of this site next to the one on the right of the list of seven thumbnails because you came back one. At this point you could click on any one of the other thumbnails and go directly to that site. (This is a just a picture for illustration of the concept it is not a working model.)

4 thoughts on “How to improve the browser’s go-back function.”